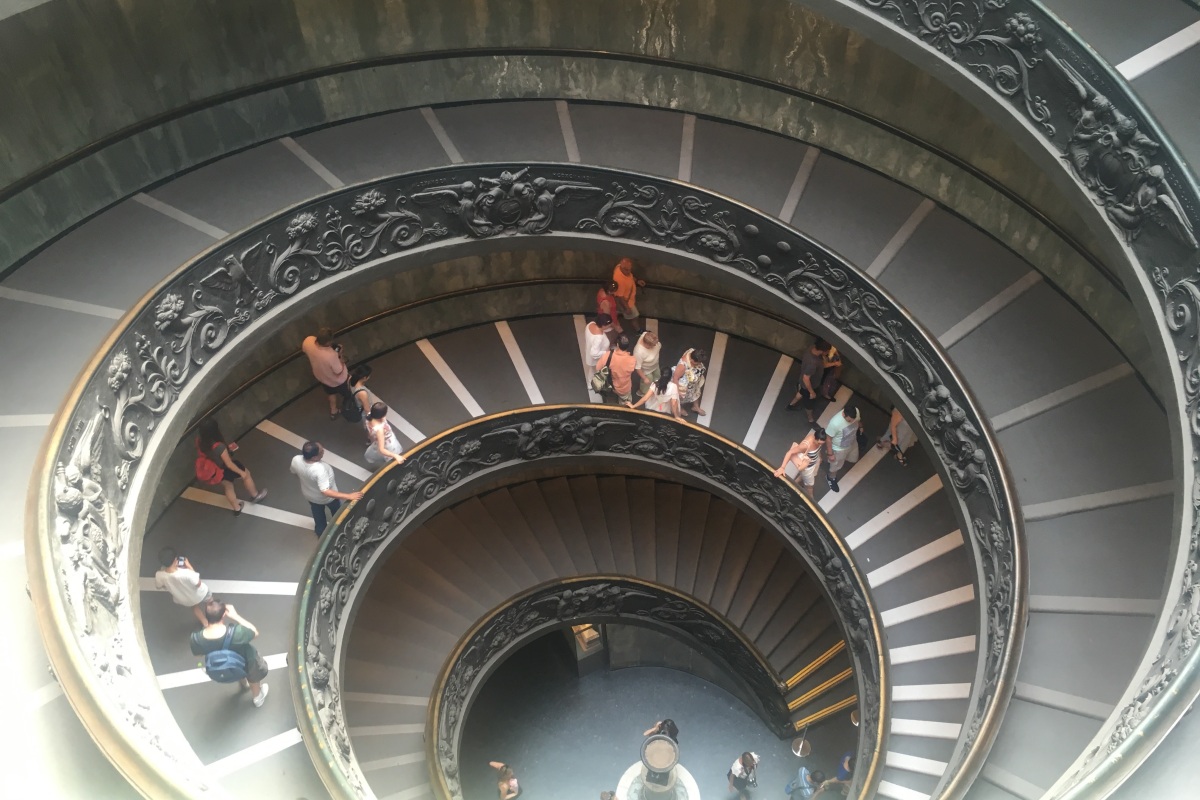 Welcome back to another museum experience brought to you buy Pirate Monkey Painting! Check out the last travel post here and the last hobby post here. 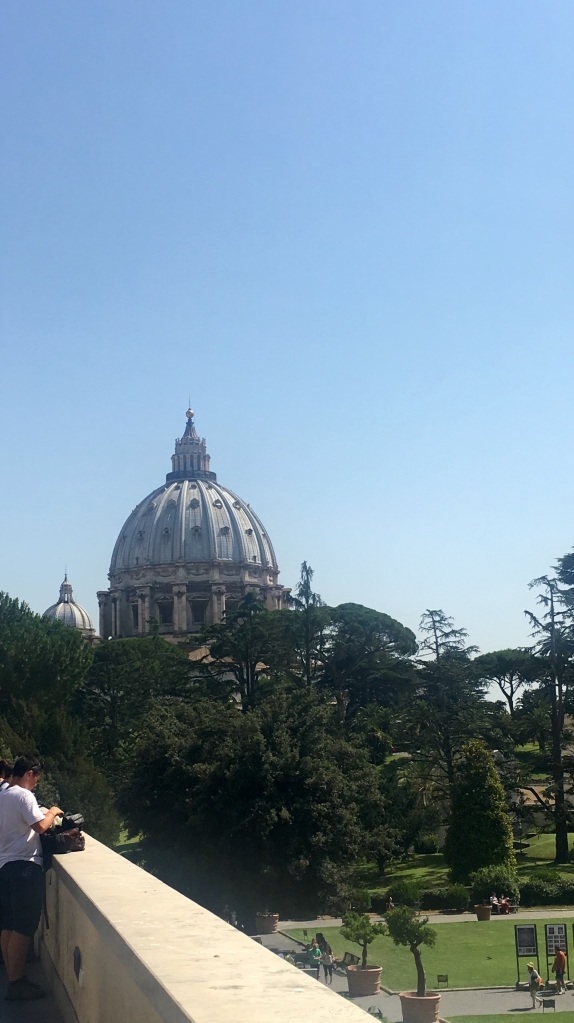 The Catholic church began during the life of Jesus, over the centuries it grew until somewhere in the 2nd or 3rd century the church organized itself at the Vatican in Rome. Throughout its history the religions leaders, lessons and themes have been the subject of artists imagination. The Vatican Museum is the church’s finest collection of its histories creative artifacts and it is immense. Ranking number 5 in the world’s largest museums it has enough floor space to take up 11 football fields.

The outside of the museum is deceptive as the entrance of the museum is a part of the vatican’s wall with a door and the line. If you arrive to late then prepare to bake in the sun for a while as you wait to get in. Thankfully I had a liter of water to sip on while I inched up the line. When you finally enter and go through the security check a large space opens up to you and there are a couple of different directions to go. Without much hesitation I went to the renaissance art and was rewarded with what I came for. All of the masters from that period have some form of work in those long halls. 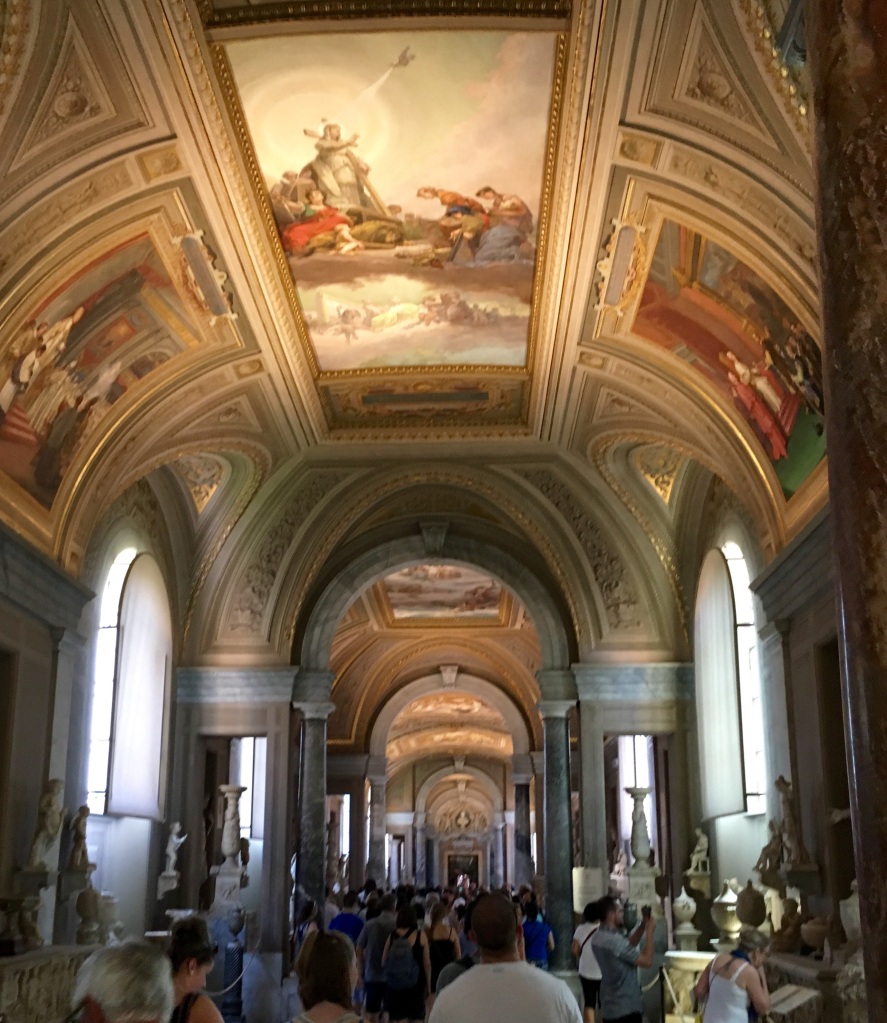 The museum frequently transitions between sleek modern and original architecture seamlessly and elegantly. The new renovations also don’t interfere with the sight or views much either. 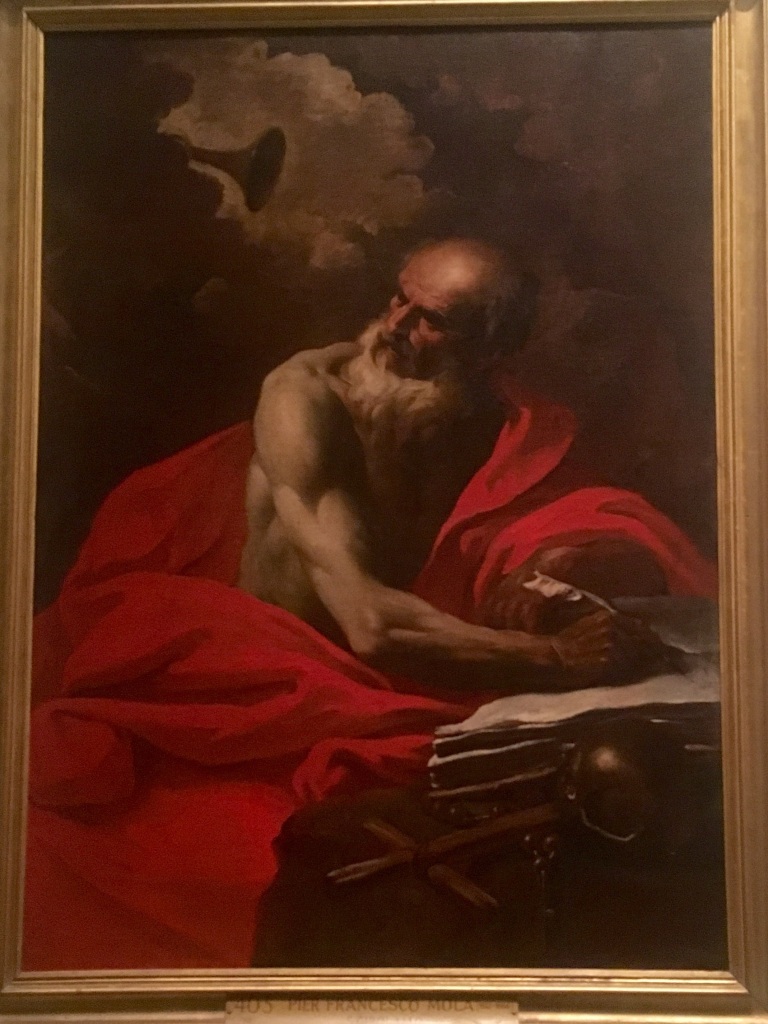 Wandering the halls I attempted to give each piece its own time, studying and analyzing. reading into the story the artist was attempting to tell or dissecting the beautiful colors and forms.

The fresco’s are everywhere. Nearly every room had some stunning painting not only hanging on the walls but also painted on the ceilings 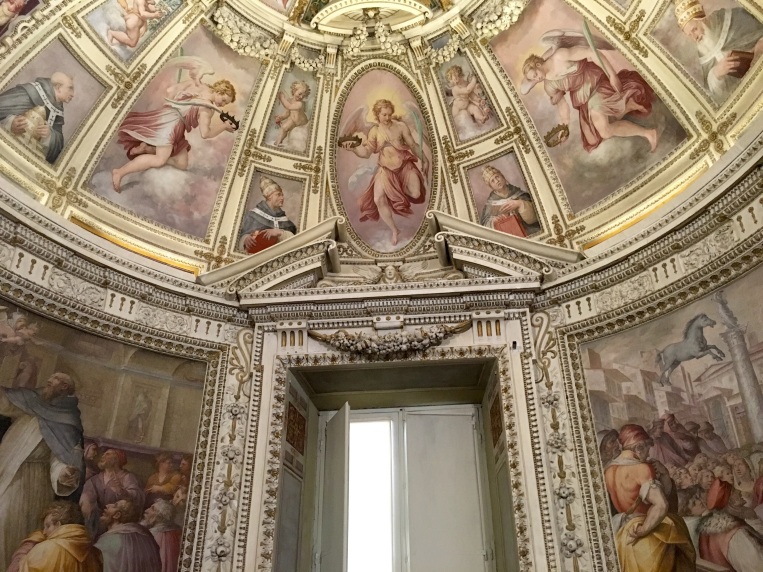 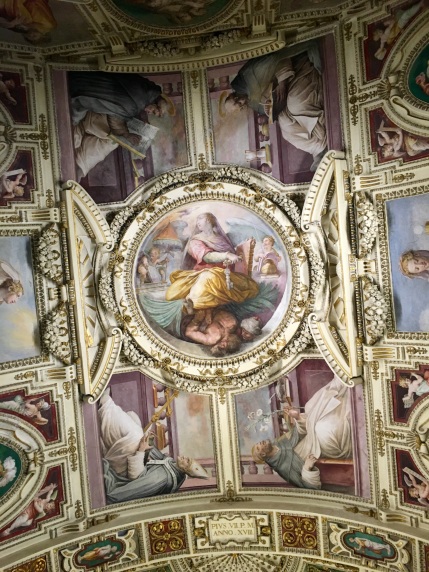 Most of the rooms were from a specific period going all the way back to the Ancient Egyptians. The renaissance paintings were of course many of my favorites. Caravaggio and Da Vinci, Raphael and Titian .

Did I mention artifacts? The church loves the shiny stuff, they tithe they collected in fine metals jewels and other means allowed them to have these incredible artifacts crafted. I won’t get into the morals of the tithe here but nonetheless these are stunning examples of fine metalsmithing 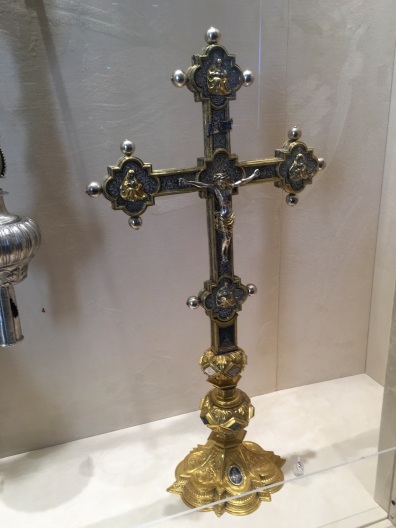 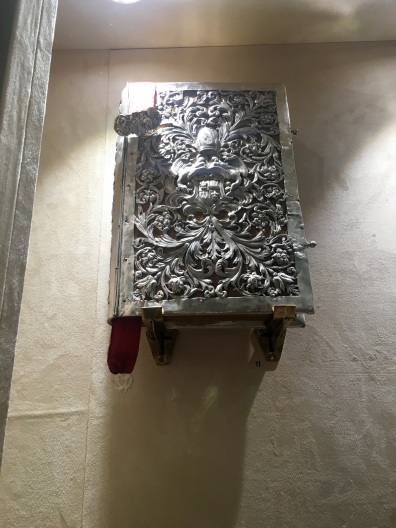 At one point I found myself walking down a long hall that had paintings of each region of italy upon it in detail accounting all of the rivers and cities that it contained at the time of note. I had wondered almost half way down the hall before realizing what it was!

One section that grabbed my attention was one of modern to contemporary religious art it was interesting to see some of those wild takes on catholic topics from Dali and others with their wild colors and simple forms nonetheless they were gripping. 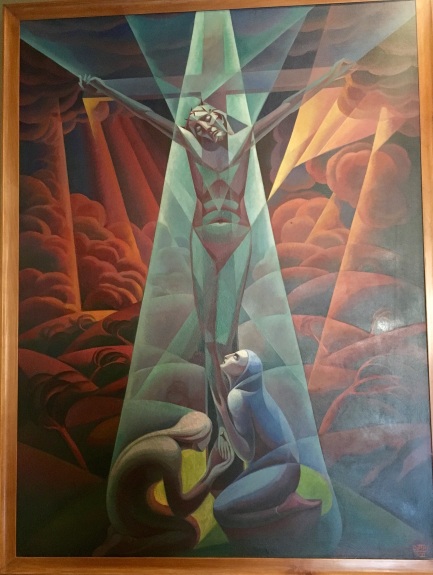 Near the end of the expedition one walks through a few halls before being let into the Sistine chapel. This small space contains Michelangelo’s masterpiece fresco on the ceiling and The Last Judgement on back wall. 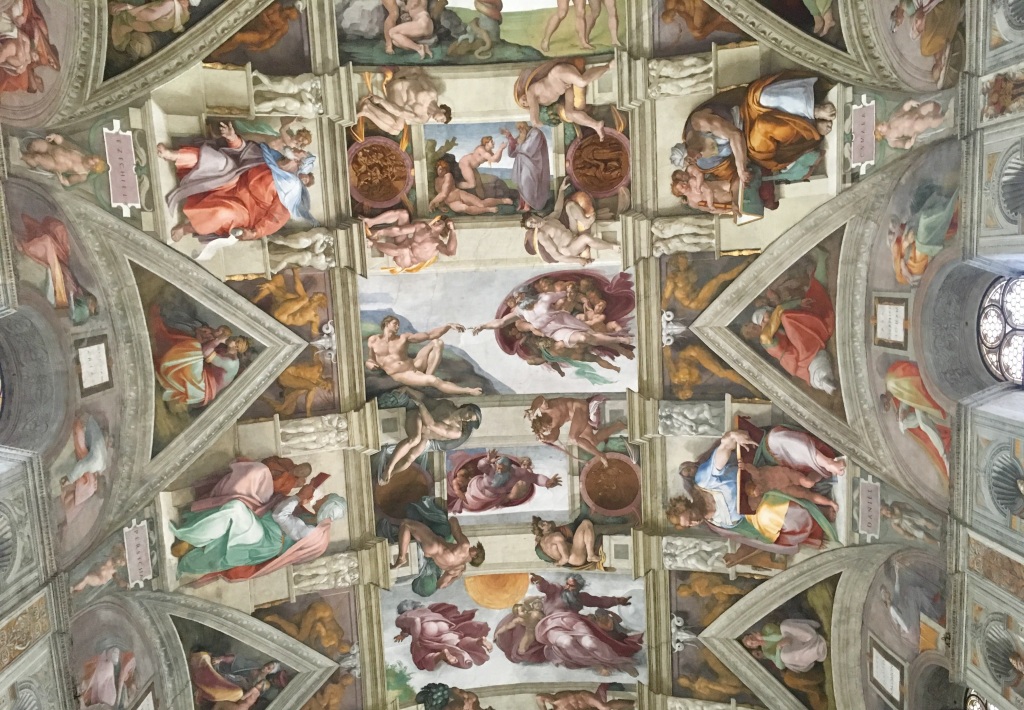 Even the walls are painted to look like curtains fresco by other masters Sandro Botticelli, Domenico Ghirlandaio (this was one of Michelangelo’s masters)and Pietro Perugino are also on these hallowed walls. All of these things combined makes the space feel much larger than it is and this causes people to cram in because they think there is room. The idea of using freehand to make a space feel larger is something that would be interesting to explore in miniature art! Especially because we are working so small to begin with. 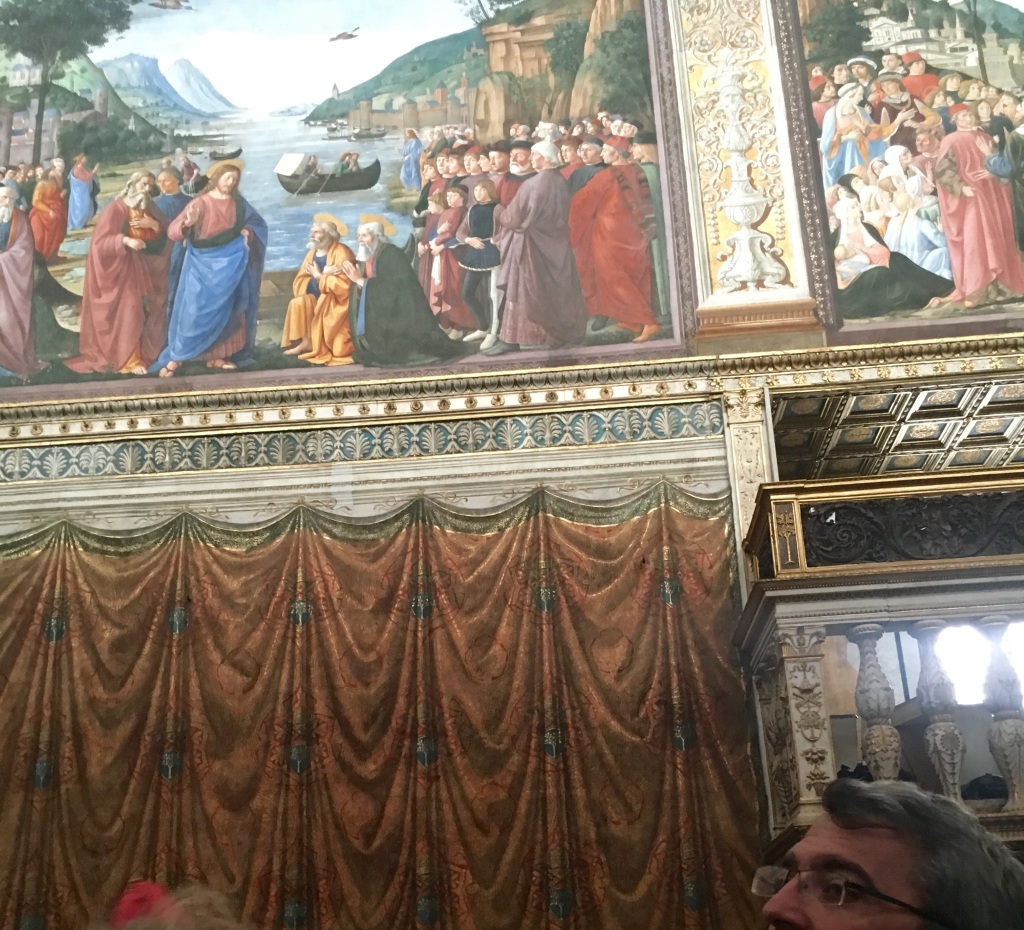 The artworks have so much energy that people of course want to chat about it but the rooms acoustics tend to magnify the sound leading to the guards tapping on the microphone and loudly shushing the whole crowd or angrily saying “SILENCIO…”  in italian usually followed by “No Photo…”  it’s a waste of effort though as people continued to chat and take photos the whole time. The guards frequent interruptions were louder then the murmur itself. I took my by holding my phone at waist level and pressing the volume button. Even with all of that though the frescos are stunning even more so considering that it was not michelangelo’s main focus 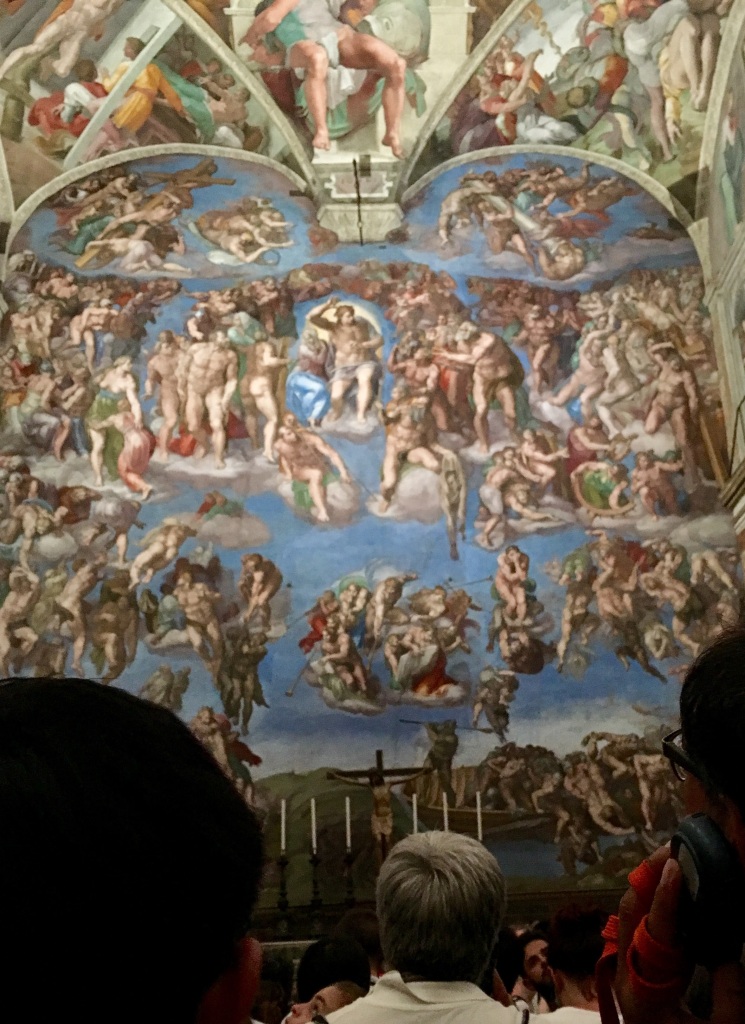 As I started to leave after gazing up so long my neck became sore I quickly realized that this was the end and attempted to return which ended up with guards pointing out.
Even though my time came a little prematurely I thoroughly enjoyed it and can’t recommend visiting this one more. It truly is a testament to the creative world and gave me enough to study and ponder for a lifetime

Thanks for stopping by!