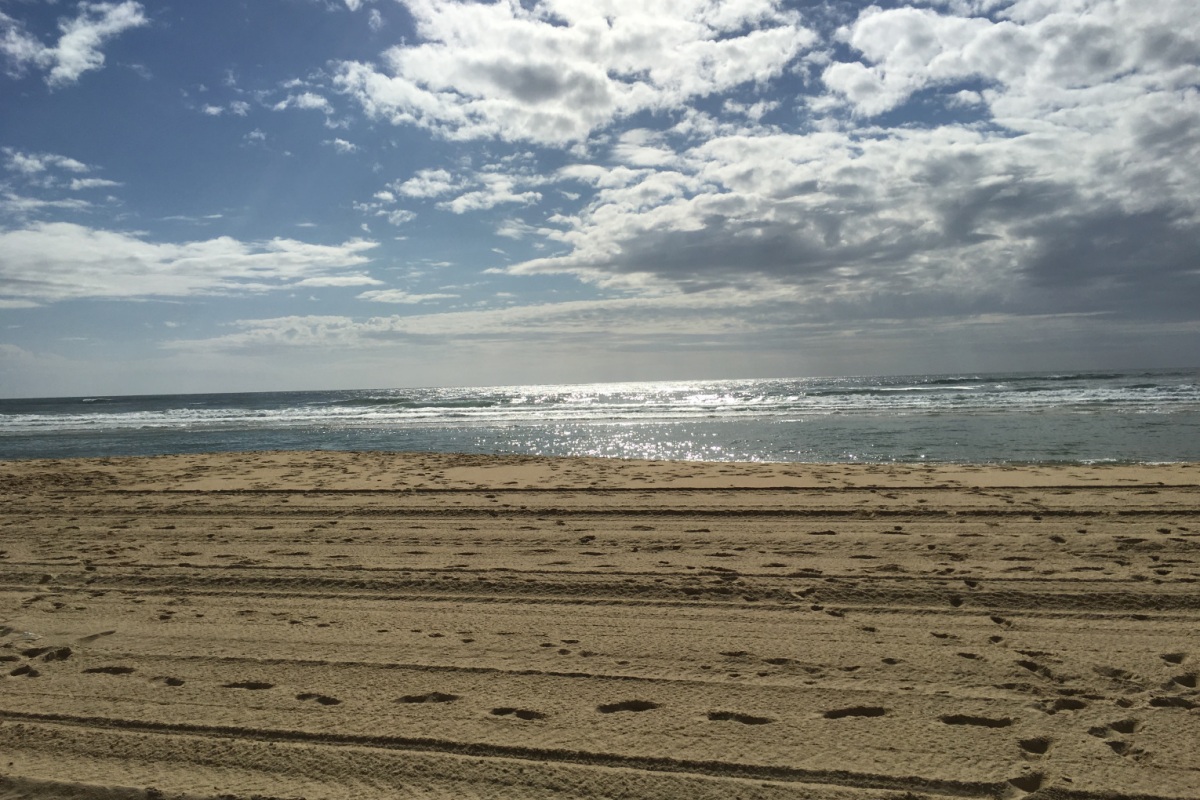 Welcome Back everyone! Thanks for reading, this is the final part of the main bike tour. 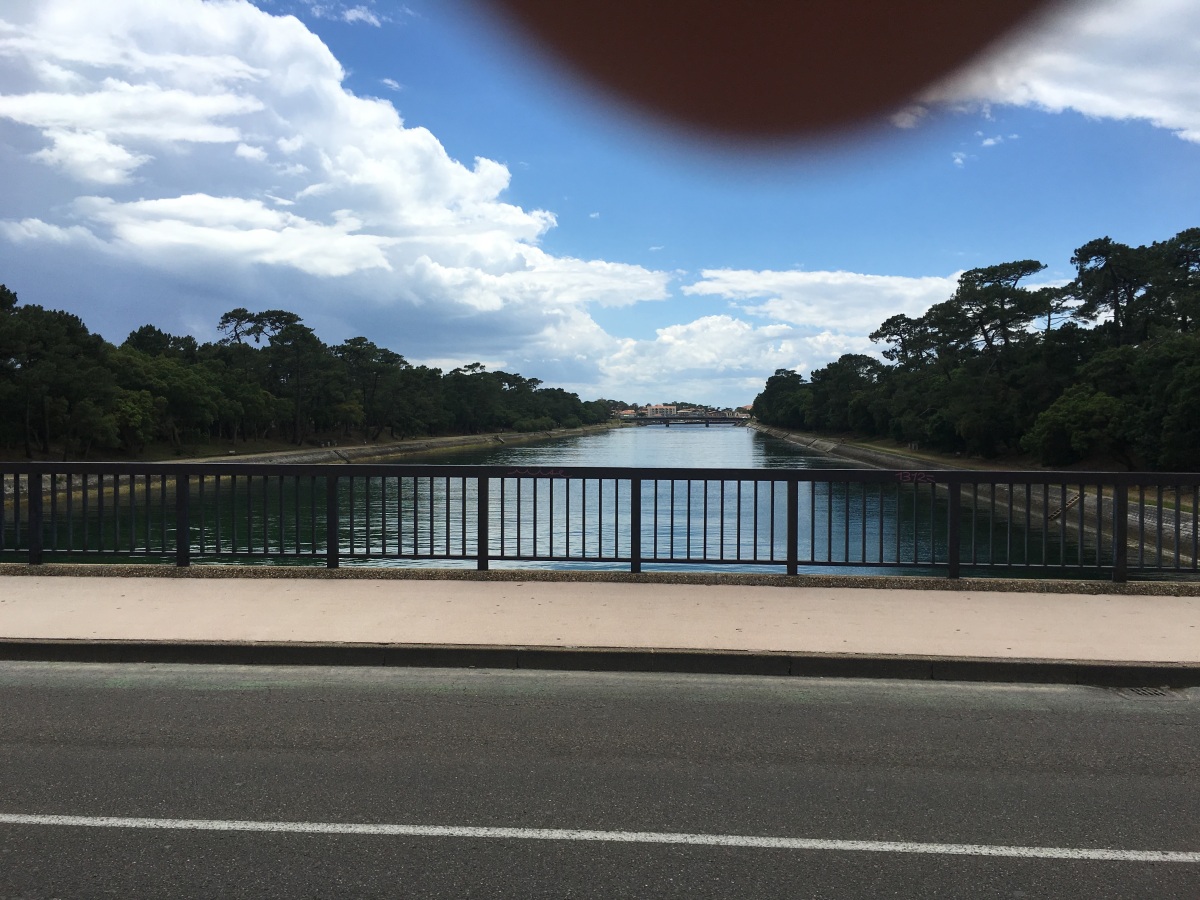 By the morning, the rain had broken, and the wind had died down, as well. Everything was covered in sand, and I did my best to shake out my belongings before packing up. I sat in the warm little laundry room, charging my phone, and eating my breakfast of cereal and I finished my supply of hobnobs. If you’re wondering, yes, it was the same pack; these cookies are like Lembas Bread. My maps showed me that there was a path that led almost all the way to the border of Spain. I was very happy for that path, as it meant that I was going to have to do a lot less thinking, and a lot less checking my phone, which meant more audio book and music time. I took off down the path, which stayed fairly close to the ocean. There was a constant breeze coming off the surf that kept me cool the whole day. I sailed along the path through the now mainly evergreen forest. The trees had a lovely color, deep reds and light purples stippled up the trunks. The hills were very forgiving, and I took my time, as I cycled through the halls of this ancient forest. My ankle was still tender, but the ibuprofen I picked up in Bordeaux was helping with the pain and swelling. I stopped and ate my lunch at a little bus stop shelter. The canned pasta and sweetbread that I ate made me happy. I sprinkled the crumbs into the little ant traps that the ant lions had dug, and watched the bugs attack them ferociously. 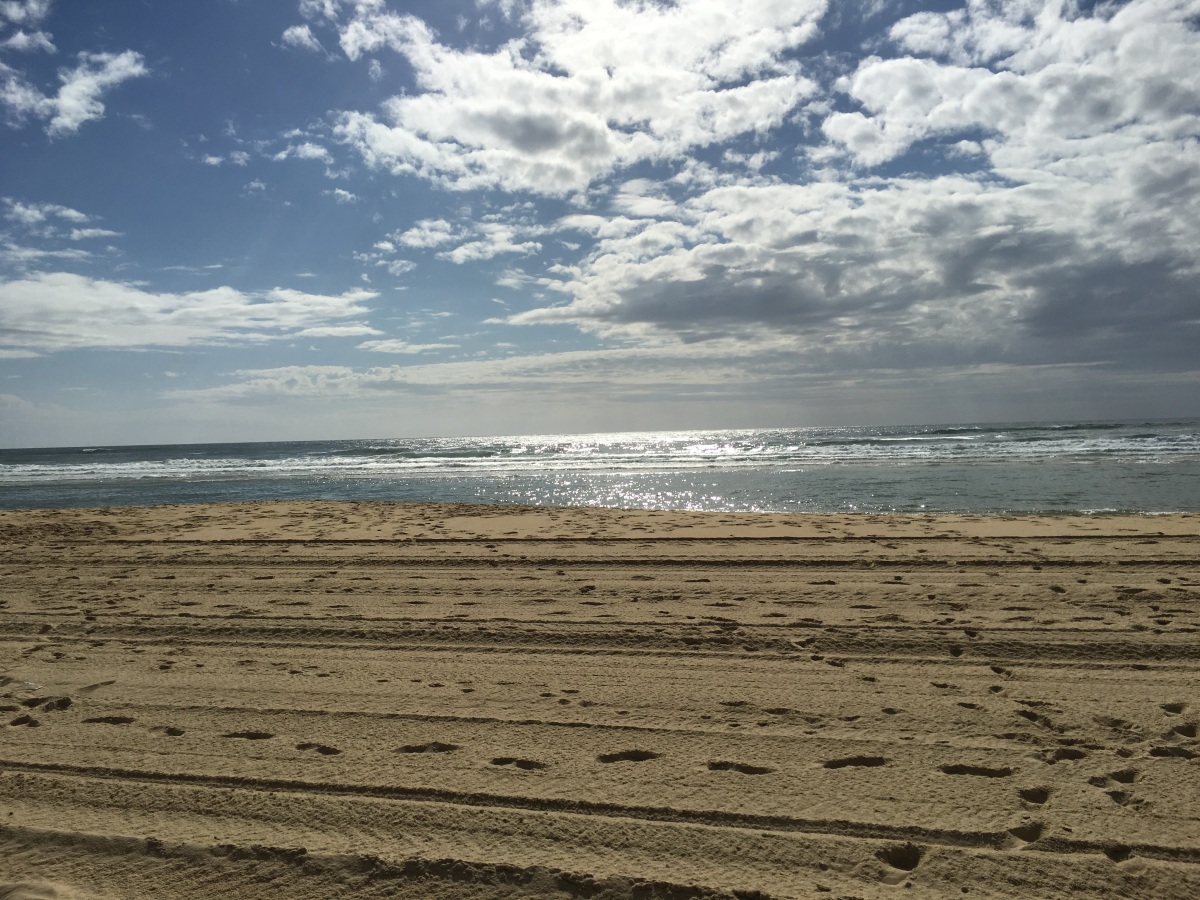 I hopped back on the saddle, and went on my way. The next portion of the forest along the trail had been cut down in sections. The placards explained that they forest service was cutting down the forest in 4 increments,  and allowing other parts to grow, before cutting the next portion . This allowed the forest to regrow naturally, as well as helping the forest to be healthy. I thought it was really great how they were cutting and growing in a sustainable way.

Eventually, I made my way to Cap De L’Homy, after 62 miles. The camp was again on the beach which made me very happy. I was given a sandy little corner right next to the German surf camp. Thankfully, this was not as bad as it could have been; these kids were so exhausted from the surf that they weren’t rowdy at all. The camp didn’t have a easy-to-find outlet, and I spent a half-hour walking around and looking. I found one eventually, but I had to set my phone in a precarious position: balanced on the top of the outlet outside a bathroom. After I showered, I went and sat on the beach, and watched the sun set over the Atlantic. With the sunset came the rain. I slept like a baby.

The next morning, the rain hadn’t subsided. I threw on my jacket (which is only a bit water resistant) and hopped in the saddle. This was the beginning of the end. I honestly don’t remember much of this day. The trail ended about 5 miles outside of Bayonne, and the rain only got heavier. It stopped momentarily upon entering the city limits, but after about 10 minutes reprieve, it returned with a vengeance. I stopped to take a quick rest under the cover that a small shopping area provided, when another tourist came to the same spot. He was French and happy to have somewhere to stay dry for a moment. We chatted about where we were coming from. He took off before I did, and after that, I found a camp in Biarritz.  I had to stop multiple times to try to get directions to the camp, because the signal on my phone was so messed up. My phone kept getting wet, to boot; so wet that the screen started malfunctioning. Just outside of Bairritz my phone died. 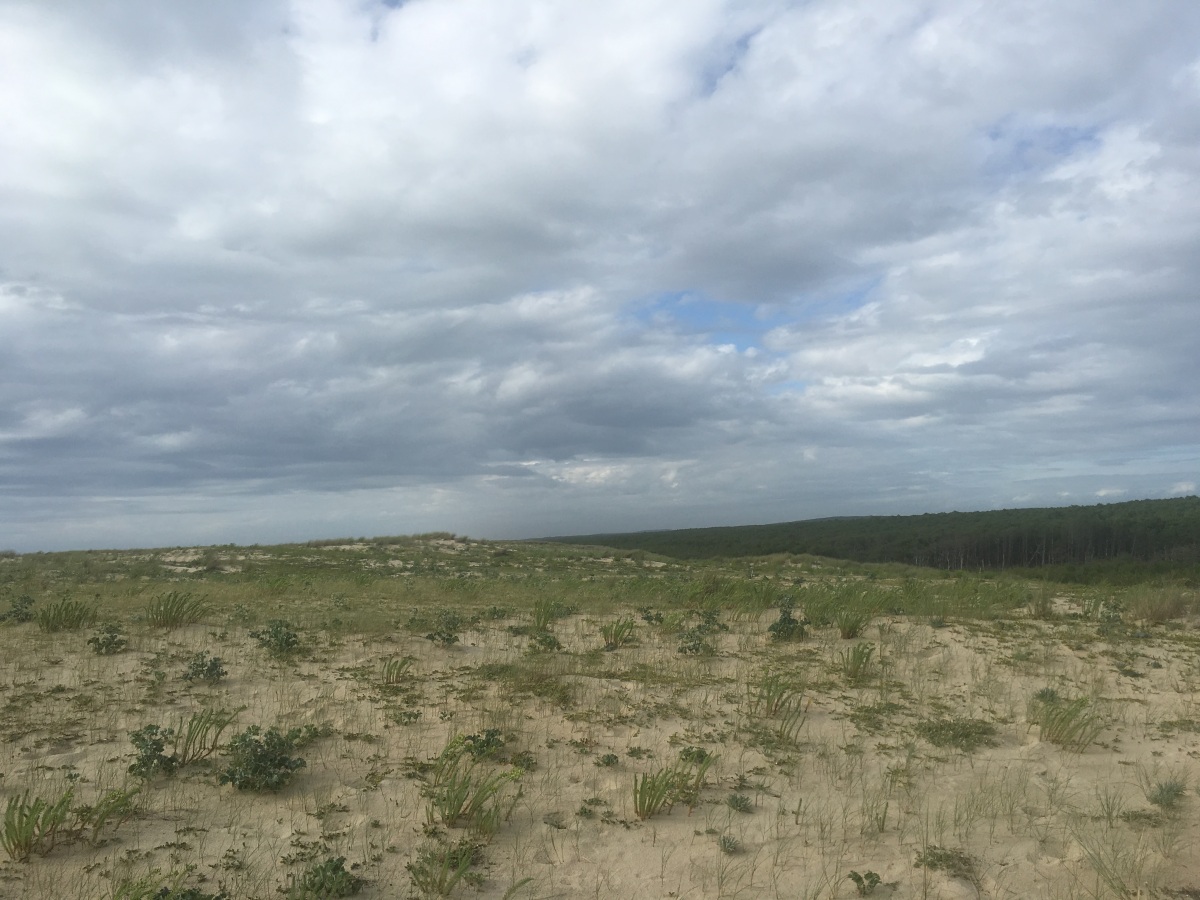 Somehow, my luck came through, and I ran into the same cyclist I was chatting with earlier in the day. He was heading for the same camp, and I followed him there. He proposed that we share a camping space, to save us both some money. I was pretty quick to agree, as I was all about saving some cash. We both set up camp, and went our ways for a little bit; I went to shower off, and he took a little rest in his tent. A bit later, we met up at the little restaurant on camp, and watched the next French Eurocup match. I got him a round of beer, and he got the next. We chatted about football (soccer), he asked me questions about the USA, and I asked him questions about where he was from in France. We chatted about other adventures we have had. Eventually, the game ended, and we made our way back through the rain to the tents, said goodnight, and parted ways. The rain would not relent. 62 miles covered that day. 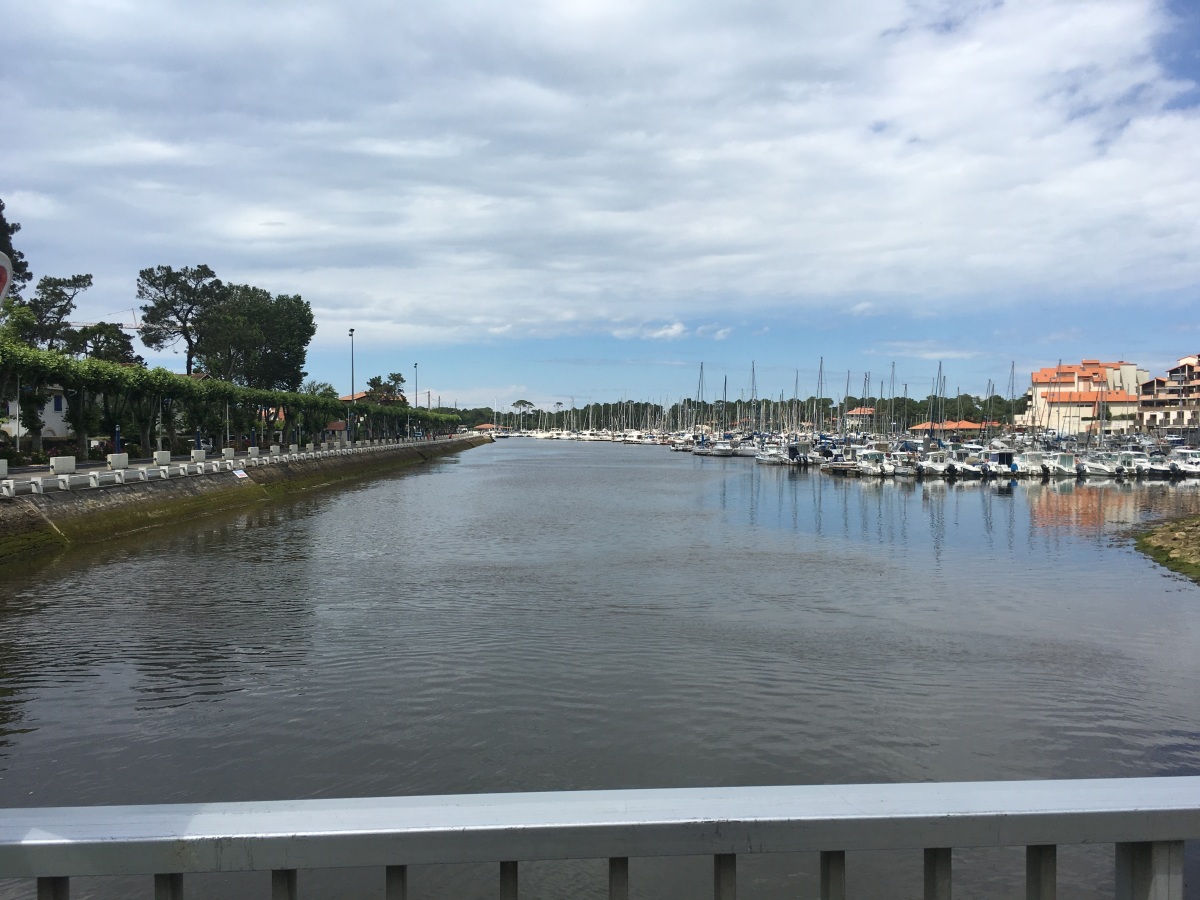 The next morning, the rain had eased, but it was still sprinkling. I packed everything, and dried off in the wash area. I noticed that the garbage can had new trash bags, and I looked around for an extra. I nicked one, and cut holes for my head and arms so I could actually keep dry. I hopped on Airbnb and found a room for a few nights in San Sebastian.  After a half hour, I threw on my garbage bag and hopped on my bike for the last day of my bike tour.

It was miserable. It pains me to remember it, but the rain was non-stop, I was in pain, and was physically and mentally exhausted. Thankfully, it was going to be a short day–or so I thought. The cycle to the border of Spain was rainy, but generally flat. Crossing the border was a very happy moment. I felt like I had actually achieved something. This personal victory was quickly overshadowed by the enormous hills and narrow roads that had to be cycled over to get to my destination. Did I mention my break pads desperately needed to be changed? I took a little break in Irun, and ate some Burger King, hoping the rain would subside. It slowed just a little bit, and I went back on my way. Nearly there.

A few hills later, and a little bit of walking the bike up some stairs, and I crossed the city limit into San Sebastian. After another few miles, I made it to the general area of the Airbnb. I went up and down the hill, trying to find the building. The GPS was confused. After another couple of trips up and down the hill, I eventually found the apartment building tucked into a quiet corner. I was greeted at the door by Sala, who showed me where I could lock up my bike; and we walked the 3 flights of stairs up to the flat. I met his wife and son, and he showed me my room. I unpacked and relaxed, truly relaxed, for the first time in a long time. I couldn’t believe this crazy bike adventure was done with. I was happy to be out of the rain, though. 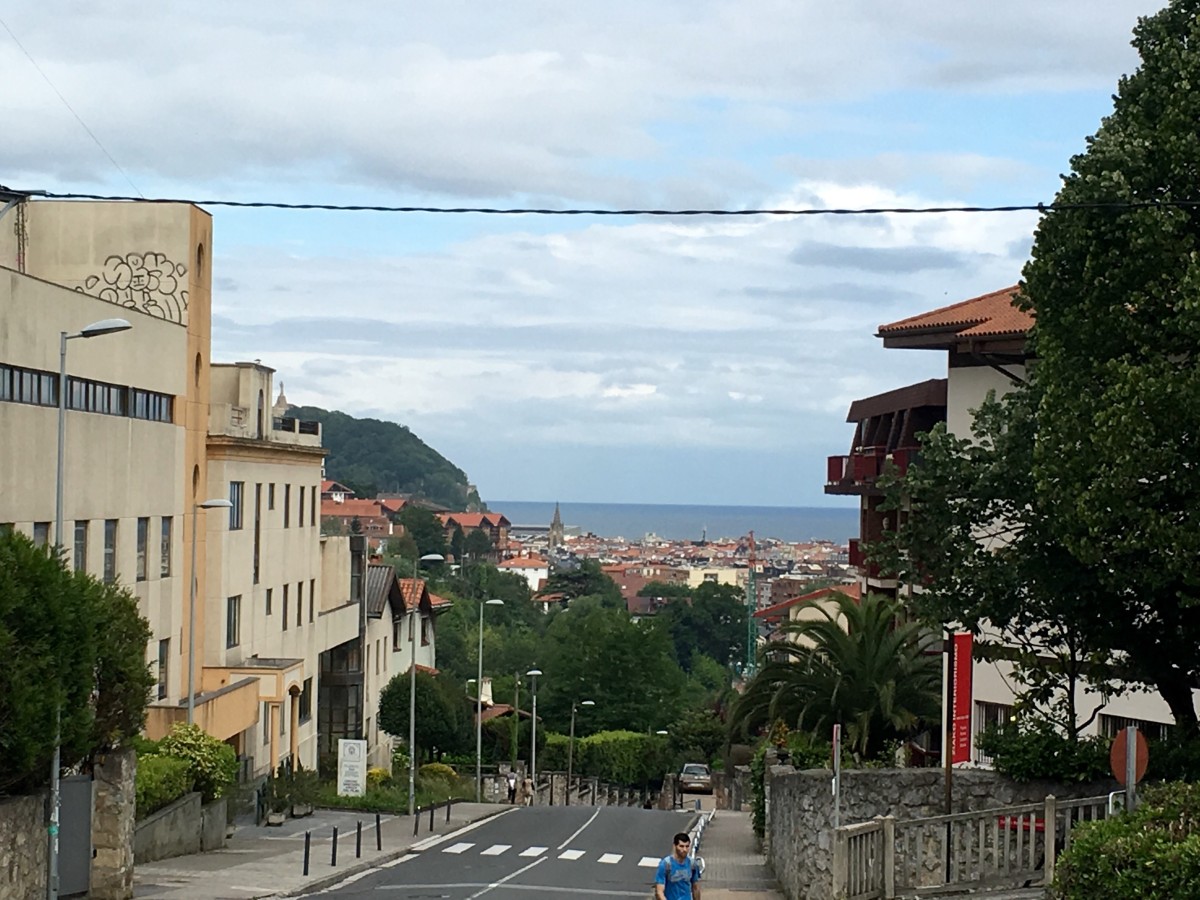 That last day I cycled 35 Miles but it felt like a heck of a lot more. All in all I cycled 635 miles during the main bicycle tour. But this was just the beginning of my adventures in Europe!

Next up is about my time in San Sebastian!